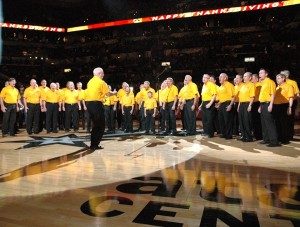 Our chorus started with a brainstorming meeting of several inactive barbershoppers at the home
of Artie and Diana Dolt in August, 2013. The purpose was to determine whether there was any
interest in starting a new men’s barbershop chorus in the metropolitan San Antonio, Texas area.
Thankfully, the group decided to proceed and an initial rehearsal of nineteen singers was held
on September 9, 2013 in the fellowship hall of the Presbyterian Church in Leon Springs, Texas.
“Friends In Harmony” was chosen as both a chorus name and the social culture we want to
establish. Artie designed a logo that, pretty much, symbolizes who we are… a tightly-knit group
of friends who enjoy singing four-part, a cappella harmony in the barbershop style.

As the result of a very successful word-of-mouth, by invitation, recruiting policy, in less than a
year we outgrew our rehearsal facility. With a membership exceeding eighty singers, we
relocated to the magnificent choir rehearsal room at University United Methodist Church
(UUMC) in San Antonio where we meet from 6:45PM to 8:45PM every Monday evening. Spouses,
families, friends, and visitors are always encouraged to attend our weekly rehearsals.

In August, 2014, paperwork was submitted to charter the South Texas Alamo Regional
(S.T.A.R.) chapter of the Barbershop Harmony Society and it was approved and received in
March 20, 2015. In June 2015, we passed the 130 member mark and look forward to our future
continued growth. Amazingly, over half of our singers are first-time barbershoppers!